On this virtual tour you can look around the rooms we have selected for this presentation. Use the mouse key to navigate through the rooms.

Information about guided tours of Town Hall by Bremer-Touristik-Zentrale (BTZ) as well as additional information is available here... 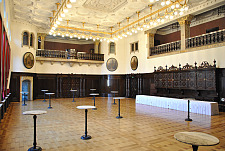 "Festsaal" is the largest room of New Town Hall. The dark, shining oak paneling is effectively contrasted by the bright ceiling. The rectangular Art Nouveau chandelier contributes to the festive character of the room. The south side of the room shows a large painting of a panorama of Bremen in the 17th century.

"Gobelinzimmer", next to "Kaminsaal" (Fireplace Room), is a room intimate as well as elegant. It is well suited for top level or "inner circle" consultations of politicians and other members of the administration. On Fridays, however, this room can be rented for wedding ceremonies, a service widely used.

The fireplace, made of French marble is purely decorative, no fire has ever burned in it (there isn’t even an airshaft).

The dark red wallpaper is silk, the ceiling of white stucco and the crystal chandeliers create a somber but festive atmosphere. The old oil paintings show portraits of Bremen merchant families.

"Güldenkammer" as a room came into existence as part of the remodeling of Old Town Hall in the early 17th century. When New Town Hall was built at the beginning of the 20th century, "Güldenkammer” was renovated and then remodeled in Art Nouveau style by painter Heinrich Vogeler (1872-1942). He designed a complex work of art of unique ornamental energy. It is one of Germany’s very few Art Nouveau rooms still preserved the way the artist once created it. The room glows in splendor but is cozy at the same time. The delicate, intertwining Art Nouveau motifs of the peacock and the rose are found everywhere, from the door handle to the lamps to the wooden inlays of highest craftsmanship on the paneling. The walls are covered with gilded leather. It is rightfully said to be the most beautiful room Bremen has to offer.

"Obere Rathaushalle” the understated name conceals the fact that this is Bremen's most impressive, most spectacular and most prestigious room. For centuries, "Obere Rathaushalle” was the heart of political and legal decision making in Bremen. Councilmen and senators, the rulers of the city, as well as judges of the High Court, convened here. Today, it is used for prestigious receptions, large conferences of the Prime Ministers or Ministers of the 16 "Länder” of Germany, for large social events and for concerts.
Featuring a length of 41 meters, a width of 15 meters and a height of eight meters, it was one of the largest halls in Europe in a secular building when it was erected in 1405.

In reference to the ancient Roman Republic, the ruling body of the executive power in Bremen is called "Senat". Each Tuesday the Senators (in the other "Länder” of Germany they would be called Ministers) convene here, accompanied by their top advisors.

The huge one-piece carpet contributes to making this room a quiet and pleasant place for serious discussions and decision making. The walls are covered with brown, patterned silk and the large crystal chandeliers give the room a solemn atmosphere. The ceiling of white stucco shows the sun and the four seasons, creating a contrast to the dark walls. Since Bremen had always been under the immediate protection of the emperor, the eight paintings on the walls show former emperors (of Germany). 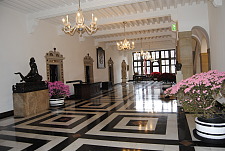 Spacious and bright, with a floor of black and white marble, the lobby on the first floor gives access to the offices of the Mayor and his top aides as well as to the "Senatssaal”, where the cabinet meets each Tuesday. Busts of several famous German politicians who had spent part or most of their lives in Bremen are exhibited here: most notably Friedrich Ebert, the first President of the Weimar Republic, Theodor Heuss, the first President of the Federal Republic of Germany, Wilhelm Kaisen, the famous mayor of Bremen after the Second World War. There also is a marble statue of Johann Smidt, mayor of Bremen in the early nineteenth century who founded Bremerhaven in 1827.