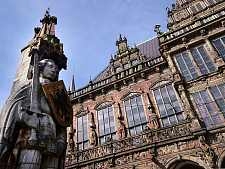 The original function of the two subsequent floors has also been retained until today. The upper floor was reserved for representation, and the ground floor was intended for use by the "market people", today all citizens. Thus the population was joined with the authority - a function that has been retained until today and another reason to enlist the Town Hall on the World Heritage List.

UNESCO also sees the special importance of the Bremen Town Hall in its artistic and stylistic values: today its main façade represents the so-called Weser Renaissance and is considered a highly representative example of this style. The medieval attributes of this building - such as the emblematic sculptural decoration in sandstone - remained at their original position. It is also to be underlined that the Bremen Town Hall reflects European-wide trends at the end of the 16th and early 17th centuries.

The Bremen Town Hall was expressly built for the use of the City Council. The architecture and the sculptures do not only carry strong references to the imperial and Episcopal foundations of the city, but at the same time underline the policies of self-government, which had been chosen by the Council. The construction of the Town Hall demonstrated grown self-confidence of the city council and its civic claim to power.

The Bremen stone Roland, erected in 1404, is 5.5 metres tall and one of the oldest and most representative roland statues, which were once erected on marketplaces in Central Europe as a symbol of freedom and market rights. It is referred to a historical figure, paladin of Emperor Charlemagne. The Bremen Roland is to underline: the Emperor is the founder of the city, it was him who has given the city its rights and privileges. The Roland and the Town Hall of Bremen are part of humanity's world heritage as they bear a unique testimony to civic autonomy and sovereignty as these developed in Europe over the centuries. The symbolism of the Town Hall and the Roland reflects the autonomous status of the Bremen city state until today.

Motives of the Town Hall

A timetable for tours of City Hal offeredl by Bremer Touristik-Zentrale (BTZ) as well as additional relevant information is available here...